Close
Ask a Question
Home/Questions/Q 1166
Next
In Process

Why is geothermal energy not widely accessible compared to other renewable? 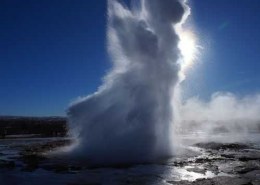 Geothermal technology is an emerging renewable energy source across the world. It is generally used for power generation as well as other thermal applications such as an industrial heat input.

Geothermal energy is the heat that comes from the sub-surface of the earth. It can be used to generate clean electricity or used for cooling and heating purpose. A geothermal power plant usually has around 90% capacity utilisation.