Close
Ask a Question
Home/Questions/Q 1236
Next
In Process 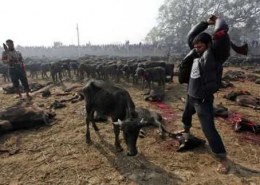 I thought Hinduism encourages non-killing and vegetarianism, but I was wrong when I saw gruesome images of the largest animal sacrifice. It has been underway in Nepal, which is the only Hindu kingdom on earth.

The way they were brutally cut animals into pieces is inhuman and highly appalling. It must be stopped.